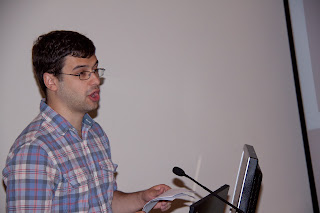 In ‘Women, Star Trek, and the Early Development of Fannish Vidding,’ Francesca Coppa defines vidding as “a form of grassroots filmmaking in which clips from television shows and movies are set to music…to comment on or analyze a set of preexisting visuals.” This statement is consistent with the scholarly and popular assumption that a vid’s moving-image source is primary while its audio is lesser, used for framing its critique. It is my contention, however, that the inverse is also true. Vidders are often also fans of the music they appropriate and it is possible to see a critical reading of the audio taking place as well as the visual. To show this I will mount two close readings. The first highlights the critique of lyrics by examining how remixer, Sloanesomething, implicitly critiques the sexism of the song, ‘Too Many Dicks’ by Flight of the Concords, as well as the movie, Star Trek, in her vid, ‘…on the Dancefloor.’ Then, I will look at the melodic content of the music itself, using Charles Sanders Peirce’s concept of secondness and reading Sweetestdrain’s ‘West of her Spine,’ in which soft music is laid over and contrasted with violent images from the show, Dexter.