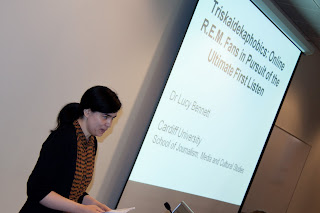 In this paper I discuss how the Triskaidekaphobics (Trobes), a social sub-group within Murmurs.com, an online community for fans of rock band R.E.M., assume a non-normative status, due to their temporary spoiler evading activities concerning the then forthcoming R.E.M. album. Driven by a nostalgic aim to recapture the experience of buying a new album without prior knowledge of its contents during the first listen other than officially released information, these fans endeavor to resist the new technology and instead aim to restore the pre-Internet experience of listening to and purchasing a new album as a singular event. I demonstrate how this pursuit of pleasure (pursuing the “first listen”) worked to disrupt the exchange of knowledge with other members and resulted in their precise cultural distinctiveness from the rest of the Murmurs community. Drawing on Fiske (1992), I show how this allowed Trobes to create a temporary form of inverted fan cultural capital that was distinct from the rest of the community and argue that this process places Trobes in a position between non-Trobes and “casual” fans, subsequently operating as a different, albeit temporary, interpretive community.