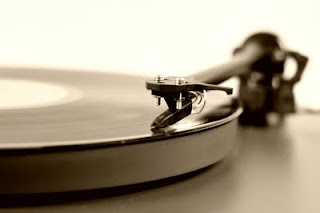 Is it just me, or is everyone else noticing a frequent use in contemporary cinema of the act of placing vinyl records on players to signify a passion for music listening? The latest example of this (after the likes of Tarantino’s Deathproof, Lynch’s Inland Empire and other films) appears in the basic but well-crafted remake action flick The Mechanic, where Jason Stratham plays an emotionally remote hit man (who else?) called Arthur Bishop with a penchant for Schubert’s ‘Trio Number 2 in E-flat Major.’ So precious is Bishop about his vinyl collection that he boobie traps his phonograph in an attempt to murder a rookie upstart who acquires his property. When the music plays, jets of (CGI) flame roar across Bishop’s living room and shatter his windows. (That’s a great result for Schubert, I’d say, in the same league as Jerry Lee Lewis!)

So why does vinyl come so heavily coded at the movies? I mean, how often do we see people slip in CDs, click on MP3s or even put on headphones. It is as if the phonograph has a key role in the representation of music at the very moment in which it is becoming a wholly defunct technology. There are, I would suggest, a few reasons for this:

1) Vinyl listening signifies obsessive musical passion nowadays. Apart from unfashionable late middle-agers (who – let’s face it – are rarely portrayed as music listeners) it is only audiophiles, DJs and hardcore collectors who are interested in slipping on some wax. The warmness of the sound is also matched here to the idea that vinyl is the ‘real thing’: music in its authentic form – how it was made to be heard.
2) Placing a record on a turntable is just more visually interesting that pressing click on a mouse. It’s a more physical practice, and there is scope for a series of close-ups: the vinyl landing on its platform, the needle as it is placed in the record, the slight click as it finds the groove, the pop and crackle, and then – ahhhh – the music.
3) Hollywood has gone phonographic, perhaps, because unlike MP3s, vinyl records signify both the past and visually segment the flow of time itself. Music is on vinyl is considered to be wrapped up with nostalgia: reiterated, sometimes socially practiced, evocative of the circularity of life, a passage of time passing as the spinning grooves hypnotically reach their centre, and that last glitch as the needle jumps its end point, stopped but not halted – as if the individual’s life met its end and yet the world carried on. And on, and on, and on… click.
Scroll Up Top