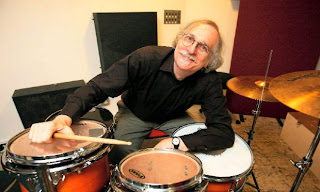 Last night when I heard the news about Dave, I couldn’t quite believe it. We had a friendly get-together planned for this coming weekend. How inconsiderate: he never said goodbye. But Dave could be sentimental, so I think that if he had to go, his doing it by slipping away was for the best. He died as he lived – a high flyer – and he died in his own native country.

The last time I saw him in the flesh was a couple of weeks ago, when he popped his head into the jazz studies reading group that I attended at Salford. He was organizing another event that day and in retrospect I was sorry that I didn’t go. We stayed in email contact right up until he flew to the USA. He was going to argue the case for George Clinton to be added to the National Recordings Registry.

I first met Dave when he came over to present a paper at a conference in Sheffield in about 1999 – we just said a quick hello. When he got the job at Salford I saw him at another event and suggested that we should meet up: we worked in the same field and lived in the same city. We became very dear friends, partly I think because without any comeback we could hear about what was going on (and sometimes going down) in each other’s institutions, and also because we use each other as sounding boards and strategize together. I always felt we were extremely lucky to have a scholar like Dave in this region. But we became more that professional allies. When I got to know Dave as a person, I felt that I was very lucky to have him in my life. We’d be in contact by email all the time, sometimes go out for meals at the Red Chilli on Portland Street, and he’d visit my place every couple of weeks with a ragbag full of DVDs.

Dave knew as much about film as he knew about music. When you watched a film with Dave he’d always turn to you afterwards and want to know your opinion. He had such catholic tastes. I think he liked quirky, ensemble pieces the best as they fitted his inclusive ethics, but we watched everything – from old film noirs to westerns, films by Orson Welles to Dario Argento, Claude Chabrol and all else in between. I still have a pile of DVDs sitting on my shelf that he loaned me. Beyond cinema and popular music Dave was a cultural omnivore whose interests also extended across theatre, literature and American politics (a little sign of home sickness). Between talking about music research and giving me a priceless education in cinema, Dave would reminisce about his past in the USA: his family life, college days, the summer camps (some of his happiest days) and his time working for BMI… By the end of the night, we’d watched a couple of films, had a few hours of conversation, and it would be getting late. Dave would clap my hand and say, “Alright, man” then be off into the night to get his taxi across town. I never counted how many times we repeated the ritual, but I was always grateful that he’d taken the time. For such a busy person, one of the wonderful things about Dave was how often he found the time to be there with you. He was creative, considerate, compassionate and thoughtful. And I’m going to really miss him.

There are more posts from those who met Dave here.
Scroll Up Top