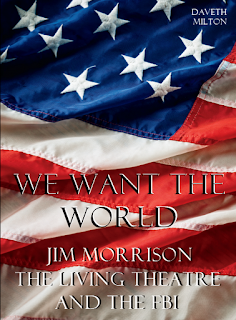 I have to say, just when we think that there is nothing more to be said about rock’s great legends, good writers have a habit of finding new angles on the story. My friend Daveth Milton has created an interesting book here that explores the Doors’ lead singer in all his glory.
For anyone who doesn’t known, Jim Morrison was both a fly in the ointment to the 1960s establishment and a rock singer who, perhaps more than anyone else, embodied a kind of death wish in public life. It is the way that he lived the tragic combination that made him interesting as a legendary icon of masculinity. Forever trapped in adolescent rebellion, Morrison denied his parents and made poetry of his oedipal existential predicament. No wonder, then, that he would come to blows with America’s ultimate father figure, J. Edgar Hoover: they were poles apart.

Jim Morrison’s music was a cultural statement that spoke for everyone excluded by the far right demagogues in charge of a global superpower. Four decades on, the story is still fresh and still fascinating. We Want The World: Jim Morrison and the FBI also chronicles Morrison’s support for a performance troupe called The Living Theatre. They supplied a working example of revolutionary social transformation that suggested the next step for his own art.

In a sense Jim Morrison took the burden of the times upon himself and died trying to uphold it… Highly recommended as summer reading!