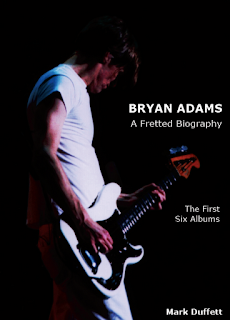 The publisher Bennion Kearney has decided to re-publish my out-of-print 1994 book, Bryan Adams: A Fretted Biography. This rock’n’roll odyssey covers the way that Adams and his manager took on the music industry and how the star levered his ‘regular guy’ image in relation to a number of political issues.

In the process of re-reading the book and doing a light edit for the new version, I was struck by how many of the themes in my current academic work were already in play. In a new afterword, I include the evaluation of the commissioning editor a major publisher who exposed the realities of music biography as a commercial business:

“It is clear to me from reading you work that you know your subject well and have a good grasp of the way in which the music business works and how Bryan Adams pursued his goals within it. Unfortunately we have no plans to publish… The rock stars whose biographies are commercially successful are those who are controversial, badly behaved, politically outspoken, promiscuous, addicted to drugs and / or alcohol, or dead through their own well-publicized carelessness. Rock stars who are polite and well behaved, but politically neutral and sexually uninteresting just don’t sell biographies, no matter how worthy they are. The same would apply to Phil Collins, Mark Knofler, even Sting.”