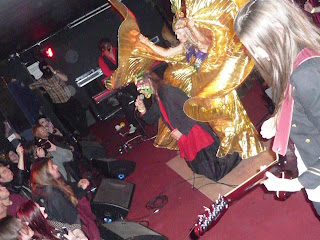 photo courtesy of Ben Halligan
Brown is “The God of Hell Fire” and he will bring you… a gig at the Ruby Lounge in Manchester… without fire, at least in the literal sense.
Last Friday I went to see Arthur Brown, best known for his relentlessly funky 1968 hit, ‘Fire,’ and the title of his debut album, The Crazy World of Arthur Brown. It is strange to watch someone who has made so much capital out of one – admittedly great – song. Amazingly, Brown has been performing it for more than the span of my entire life. He shows no sign of stopping. Britain’s psychedelic jester may no longer literally set a flame alight above his head, but he still sports the savage face paint and leaps around like a man possessed. Two things therefore strike one about the man: his jovial insanity and his capacity to defy the aging process. I will take each in turn.
Arthur Brown is “insane” in the performative sense. He is Other. He fishes around in the fog of in insanity when he dances on stage, screams and stares madly at an appropriately appreciative rock audience. The first thing that struck me when seeing him was therefore, “Isn’t this partly a marketing ploy? Craziness in service of selling a traditional musician?” The answer would be a partial yes. However, I’d add a couple of things. First, Brown is an extremely talented and versatile musician. Apart from his main hit, he peddles some blinding cover versions, and proves himself to be an adept and versatile stylist, moving between Doorseque and Black Sabbathy rock, borderline show tunes, and lively, punky reggae-type vamps. It’s an impressive set, even if he’s had a few decades to practice it. Second, his safely theatrical but tantalizingly threatening “craziness” creates a context in which his stage show becomes a space for some gloriously unpredictable antics. Insanity and mayhem add the edge of risk to rock that is necessary to deliver interesting music.
All this raises a question: can anyone be unpredictable for any extended time period? That, of course, is really a question of Brown’s artistic creativity. His performative link to madness was, apparently, refreshed back in the 1980s, when he received a Masters degree in counseling and began a parallel career in a therapeutic capacity. Apparently he even wrote personalized songs for his clients – thus suggesting that his particular brand of fire has had a healing capacity.
The thought of healing fire brings me back to Brown himself via the circuitous route of H. Rider Haggard’s 1887 book She, a central text of the imperial gothic, mired in colonialist imperative to discuss the supposed primitivism and the savagery of foreign lands. In the 1965 Hammer version, Ursula Andress plays Ayesha, the cruel queen of the title role. At the end of the film Andress steps into the flame of immortality only to find cannot do so twice. Her unfortunate fate is to be aged millennia in milliseconds by the same fire that had previously served as her means of rejuvenation… Brown shows no sign of risking that second step. He has surrounded himself by much younger musicians and an expressive young female dancer. This supporting cast cheerfully recreates the energy of his glory days. Like the old blues men he now embodies a tradition, but here it one of psychedelic experimentation that links the projected primitivism of rock to an avant-garde interest in the “fire” of human insanity. He may not be at the height of his powers, but his incendiary performance at the Ruby Lounge was evidence of an eternal flame rather than a cremation.
Scroll Up Top