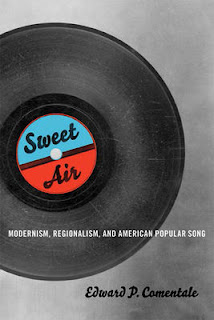 I wanted to create a blog post today around Edward Comentale’s excellent new book Sweet Air. When I saw its title – ‘Modernism, Regionalism and Popular Song’ – and read the reviews, I though Comentale was going to use sociology to explain how American vernacular music genres knit together the nation in a phase of high modernity. I expected a tale in which 1950s music pulled consumers into a shared orbit, rather like the way that steam railways knitted together time zones during an earlier phase of modern life in the nineteenth century. I was intrigued. I expected to read about things like the standardization of song lengths, shifts in music charts, and the emergence of new radio stations and formats: a sociological angle on the emergence of 1960s high modernity. Comentale actually does something more daring: he attempts to discuss the modernity of vernacular music – yes, you heard right – specifically at the level of form, arguing that rather than expressing meaning and identity, modern media forms such as popular music have ushered in an era of radical estrangement and affective pleasure that is both catastrophic and exhilarating. Catastrophic because the washing machine of commercial culture has sucked in meaningful cultural forms and transmuted them into hollow, tossed off, rebellious gestures. Exhilarating because by doing this, commercial culture has accidentally pursued the radical work of the avant-garde by trashing previous cultural hierarchies and confronting modern life with its missing elements or contradictions.
As part of this immensely interesting mission, Comentale’s first target is rock authenticity of the Rolling Stone variety: the way that critics like Greil Marcus and Peter Guralnick have enthusiastically re-established a focus on the supposed pre-modern soul of rock music. Sweet Air brings this approach into question by suggesting that at best it repackages the desire for social change inherent in the civil rights era, and at worst it sanctions a form of commodity fetishism that dwells on race, masculinity and the past. In place of rock authenticity, Comentale then alternately exposes, celebrates and ironically questions the way that our favourite songs and genres have both reflected and resisted the modern impulse to shatter cultural authority and fragment personal and regional identity.

What Comentale is really doing then, is saying that the ideological currents which we thought circulated around postmodern pop (celebration of artifice, playfulness, irony, marketing, etc) really apply to rock’n’roll and the rootsy, vernacular genres like blues and country that came before it. We have no return ticket to escape the marketplace and we never did. It is not so much that genres like the blues and country are “pop” – as in a sound or a style – but rather the moves exposed by pop are already endemic to the whole field of commercial culture. On that much, I more than agree. The discussion reminds me of Simon Frith’s work on pop artifice in books like Art into Pop (1987), and Andrew Goodwin’s discussion of MTV, Dancing in the Distraction Factory (1992). Dance seems to be an appropriate focus here, for in Comentale’s book dance itself is merely a flux of communicative gestures using the body as a tool, not some essential expression of folk identity.

In some ways Sweet Air reaches its climax in its discussion of Elvis Presley. Rarely have I seen such and interesting and sophisticated analysis of the Elvis phenomenon as it burst across 1950s America. Comentale makes a number of great points, saying, for example, that Elvis used past recordings and genres as an archive, cherry picking vocal styles simply for the sake of their own aural pleasure. His Elvis is one of affective intensity, not meaning, and one of awe-inspiring style as much as legendary music. Comentale is evidently a fan  – on page 166 he calls Elvis a “brilliant artist of everyday life” – yet to make his argument he portrays Elvis as a “grubby” teen who creates a consumer democracy that is “cheap” and “smutty.” These words are not simply attempts to dismiss Elvis as a purveyor of low culture (“Elvis the Pelvis”) but rather reflect the star’s commodified connection to a kind of orgiastic and infantile sensuality.

Comentale’s Elvis is actually at least three fold in dimension. First he is master of the market-place ‘ready made,’ a purveyor fragmented culture that is indifferent to tradition, hierarchy, identity and meaning. Instead, Elvis’s sensual democracy celebrates superficiality, aesthetics and consumer choice. As the premier symbol of vexed modernity, Elvis does this with a joyful, careless abandon, accidentally offering mattering not meaning, but an excess that then invites fan investment. Second, Comentale’s Elvis is “low” in so far that he is a ‘Dirty Elvis,’ living at the level of basic drives, desires, electricities, and vocalities saturating the actual and imagined bodies of both the King and his fans. Third, as ‘Mother Elvis,’ the Memphis Flash is a world-maker, creating a public sphere within the public sphere through the empty echo of his own baby talk and wonderful lullabies (182). Crucially, Elvis’s voice does not simply hold out the promise of deferred sexual gratification, but delivers in its own vocal sensuality so well that it evokes an overwhelming rush of gleefully conflicting emotion inside the bodies of his fans. Finally, Comentale’s Elvis is mediated: fragmented in the photographs circulated amongst fans and found in static moments of entrapped bodily dynamism. Elvis is comfortable with being photographed in private because for Comentale he is already a natural mimic, always living out one pose or another. In an age of TV, celebrity becomes visual: in this reading, gestures, facilitated by consumer technology,  become grist to the mill of an affective social exchange between star and fan base. Elvis’s style is therefore as crucial as his music, precisely because it demarcates his social rebelliousness inherent in Elvis’s a rip-it-up / have-a-party stance: “an accidental, incidental revolt, at once oblivious and obtuse, powerful by its very shallowness.” (204)

In constructing his sophisticated picture, Comentale expresses a charitable concern for the immense shifts wrought by high modernity. He constructs an iconic, 1950s Elvis from Marcel Duchamp’s notion of the ready made, Lawrence Grossberg’s notion of affect, Jacques Lacan’s theory of desire and Melanie Klein’s view of infantile drives. They combine to create a sneering, cooing, revolutionary King who is both art and artifice, faux folk but full pop. As with all stylizations, the premises are convincing. Comentale’s reading of Elvis’s Sun days and the singer’s relationship to the gaze seems exemplary. For its own purposes, though, his reading departs from such firm foundations. Fans’ interest in Elvis is explained as tantalizing affect that uses infantile pleasure in service of the market place.
Sweet Air correctly emphasizes that Elvis, as King of the youthful hedonists, not only spearheaded a tidal wave of social change; before and alongside anything else, but he also epitomized a generation because he was the ultimate collector: of clothes, records, cars, and ultimately of gestures, poses and styles. His super-charged collecting was his route to (and through) his regal status as the King of postwar consumer culture.

All that aside, I think that my own Elvis is, more than anyone, something and someone more than the sum of his collected parts. He could sew together, synthesize, naturalize and toss off that bricolage like nobody else could, and beyond his loving embrace of the wider cultural field, he also remade it in his own image. In that sense, Elvis really was more of an expressionist artist than a remix machine. What is missing from Comentale’s portrait is how Elvis’s charismatic individuality secured a power relation that helped to collectivize his fan base as an imagined community.

While Sweet Air expresses a kind of ambivalent reverence for Elvis’s Kleinian marketing skills – his sensuality, baby talk and gyrations – it only partially encompasses his uniqueness, dismisses the role of his roots in shaping the appeal of his legend, and forgets to discuss the hierarchical power that emerged from Elvis’s performed magnetism (a topic that I have frequently discussed elsewhere). Comentale does recognized the communality of fandom, but he tends to frame it more as a cheap, smutty and infantile form of democracy than as the product of a set of power relations existing beyond (but prompted, expressed or exploited by) the market place. Nevertheless, there is a lot about the symbolism of Elvis’s image and style that Comentale understands and explains appropriately. His analysis leaves one with the feeling that Elvis was not so much a folk deity as perhaps the most adept and crafty performer that modern consumer culture has ever encountered: a stylist of the highest order who used the slippery medium of the marketplace itself as his own instrument. I’m with Comentale on that. Sweet Air offers a sophisticated and fascinating take on America’s vernacular music genres.