I have just been on a ten day trip focused on two popular music conferences. They could not have been more different.

The first, held at the University of Edinburgh, was called Studying Music, but a tagline said much more about its focus: ‘An International Conference in Honour of Simon Frith.’ It was organized in conjunction with a new edited volume exploring the implications of Simon’s influential work. The three days – which included keynotes from music critic Robert Christgau and ethnomusicologist Beverley Diamond – offered a series of papers addressing the legacy of Frith’s books, plus a perceived decline in the value of music (both financial and aesthetic), and the “end” of paid music journalism. Simon attended many sessions and offered thoughtful comments. He must have felt a bit strange about the whole thing – perhaps like a ghost at his own wake – but the collective calibre of the delegates showed a real strength of appreciation for his scholarship as a monumental contribution to popular music studies.

Simon Frith has often located himself as a sociologist of popular music. I am not quite so sure. My favourite work by him has either been penetrating criticism or the times when he deconstructed discourses used by the audience or industry (notably ‘authenticity’). In that sense, in terms of his work I primarily see Simon as someone who aims to repel nonsense. His discussions of music and popular evaluation were rather more cultural than sociological, and operated more as insightful general overviews than empirical reports. On the other hand his recent survey of the live music industry was more a georgraphic case study of industrial history (and perhaps audience ethnography). It leaves me wondering whether it is possible to pursue a fully grounded sociology of music, particularly of music reception. This is not to criticize Simon’s work, which I think is great. My point is that Marx, Durkheim and Weber rarely get a mention and in many ways his work owes more, over all, to Bourdieu, Barthes and the best of rock criticism (including Simon’s, but also I think Lester Bangs) as it does to classic sociology.

That said, for me the highlight of ‘Frithstock’ (as it was being called on Twitter), was the panel session that Simon and his brothers Chris and Fred gave on the subject of listening to music. All three came from very different academic perspectives – pop studies, neuroscience and music improv – so together they really brought alive the complexity of the topic. What was interesting, finally, then, was that Simon’s very successful academic career had encountered limits in a couple of interesting places. The first was that on one level nobody could really generalize about what it means to listen to music. The second was music criticism could not really be eclipsed by academic work: sociology could not fully explain why particular music mattered, and why some groups were “better” than others. The implication here was that criticism could excavate what turns us on and why, but academia cannot quite compute such impulses of the heart. As for the wider issues – the “end” of financially rewarding music, of rock and soul ideology, or of paid journalism – they fitted the theme of the three day celebration to Simon’s illustrious career, but I’m not convinced that popular music is now all gloom and doom and we should give up on it. 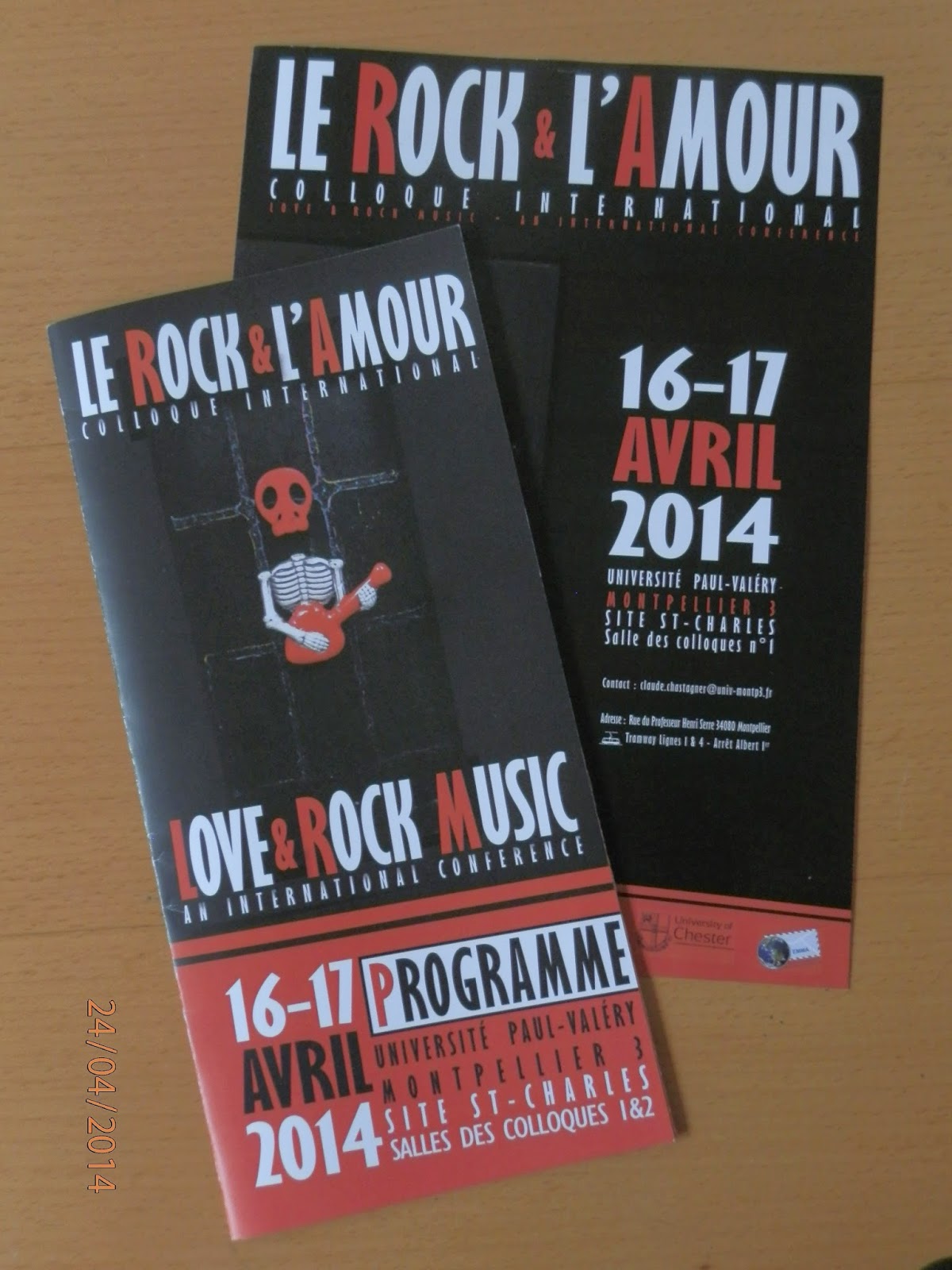 The second conference, featuring two days of talks on Love and Rock Music, in Montpellier, France, was co-organized by Professor Claude Chastagner and myself. On a basic level, everything was different at this event. The venue (a converted hospital) had a lovely, bright, clean, monastic feel. The weather was wonderfully warm and sunny. The conference catering was outstanding (gourmet French food!) and the assortment of papers was diverse and interesting. Over thirty speakers came; everyone from professors and staff at the Sorbonne to undergraduates giving their first presentations. We hosted delegates from Israel, France, Germany, the USA, Turkey, Belgium, Australia, Canada and Poland… A truly bilingual and international gathering.

Of course the love and rock event meant putting together established themes in a new way. At first I wondered about their depth of association, but the papers showed it was more than coincidental. In brief, some of the things that struck me were that music was social bonding in action, that pop had already set the standard for love songs (as romance) and that rock developed both by parodying that romantic love theme, and by reconfiguring “love” in its own, more supposedly ‘adult’ image (as something artistic, political, religious or spiritual).

One of the highlights of the event was a trip to the Rockstore, an indie gig venue in downtown Montpellier. We had scheduled in a screening of that feature-length tribute to rock fetishism, Sound City, USA, followed by a music performance. Because the group had pulled ahead of schedule, Claude had already invited the delegates – several of whom were willing players – to form a band. 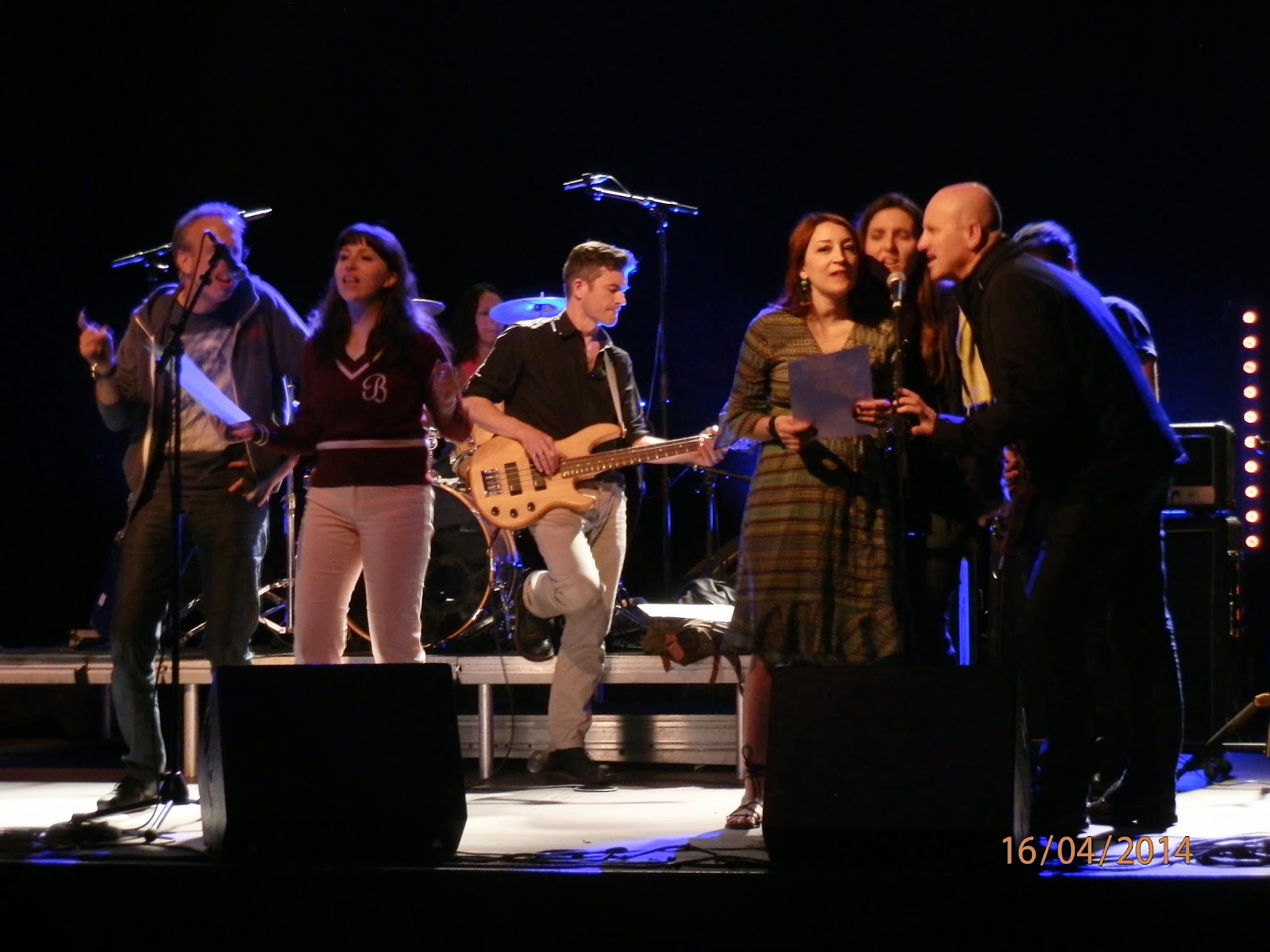 They had not made music together before that night, and after a while their sound really came together… It was as if the jam session actualized the theme of the conference and was, in a sense, love in action!

It was great to see aca-friends (both old and new) at the two events and I’m looking forward to catching up with everybody soon.