Skip to content
Share
A veteran of the UK’s punk underground, Pete Dale currently lectures in popular music at Manchester Metropolitan University. After reading Communication Studies for a first degree, together with his partner Rachel Holborow between 1992 and 2000 he ran the fiercely independent label/distributor Slampt and played in several indie punk bands. After this period Pete began teaching music and pursued postgraduate study at Newcastle University with Professor Richard Middleton. After taking up an early career fellowship at Oxford Brookes, Pete started to explore how to use of DJ decks and urban music to re-engage disaffected members of deprived communities (something he did with some success in Gateshead). In 2013 he became a Senior Lecturer in Popular Music at Manchester Metropolitan University. Ashgate published his exploration of the ideology of punk, Anyone Can Do It: Empowerment, Tradition and the Punk Underground (2012). The book is very wide-ranging and carefully draws the political ideals of the punk genre into a dialogue with critical theory. 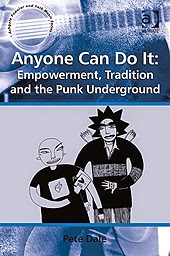