Skip to content
Share
David Gaines completed a PhD on American writers in Paris called ‘The Sun Also Sets’ back in 1980. Since then he has lectured at The University of Texas at Austin and is now an Associate Professor of English at Southwestern University in Georgetown, Texas. As well as teaching courses on American culture for the past thirty years, for seven of those years he directed the Paideia Program, a university-wide project that helps students pursue interdisciplinary and intercultural pathways. He is now Director of National Fellowships and Scholarships and continues to teach American literature, film, popular culture, and an occasional class that focuses upon Bob Dylan’s art and life. His University of Iowa Press book, In Dylan Town (2015), is subtitled ‘A Fan’s Life.’ It combines a personal account of his fandom with an ethnographic survey of Dylan’s fan community. Dr. Gaines contacted me for a preliminary discussion about Dylan fandom when he started writing the book. I am pleased to see it released and that he has agreed to an interview. 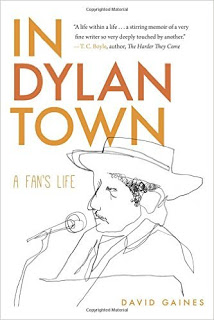 THE PERSONAL VOICE
Your book in some ways reminded me of a number of fan memoirs in that it is very much written in a personal voice. In Dylan Town is different in that it comes from a literary scholar and includes some ethnography too. What ‘writerly’ and scholarly concerns did you have, if any, about using a first person approach?
Prior to my presentation of the paper that turned into In Dylan Town I told an interested acquisitions editor, “It’s not a conventional academic paper. It has a lot of white space and first person.” In other words, I was concerned that my take might be too personal and not have the scholarly distance or gravitas that most academic presses wanted. That editor, Catherine Cocks at the University of Iowa Press, told me that she “liked the idea of a Dylan book with a distinctive voice.” Happily, they generously ended up supporting mine. I think of In Dylan Town, like myself, as one and a half parts “writerly” for every one part “scholarly.”   When the Press turned me loose, I found the “writerly” parts pure joy. My only recurrent concern was that I might be letting the shaggy dog stories get too shaggy or, even worse, that I might be drifting too far off point.
As far as my “scholarly” concerns went, I have never thought of myself as the peer of Dylan encyclopedist Michael Gray, cultural expeditionary Greil Marcus, literary critic Christopher Ricks, or many of the other fans who have written so knowledgeably of Dylan’s art. Nor could I in good conscience claim to be more than an enthused newcomer, and increasingly aware of how much I do not know, to fan studies discourse. So I stayed on the path I have been on most of my teaching and writing career: seeing some connections between scholars, translating a bit for an audience of my fellow interested generalists, cherry picking those scholars’ “writerly” moments that I particularly enjoyed, acknowledging those moments, and—on my best days—turning it all into a story.

In Dylan Town reminded me that fandom is not simply a matter of fascination (or as most folk say, “obsession”). It is also something people use as a vehicle. I’m convinced that you view your connection with Bob as a blessing rather than a curse. What has it done for you?
It has most definitely been and continues to be a blessing, one that has erased distinctions between “work” and “play” in my life as a teacher, writer, and scholar. But that’s just the professional tip of the big iceberg. When I talk or write about Dylan, I’m examining the largest and longest running theme through many of the best things in my life. Through Dylan I have thought about the power and beauty of language, the importance of politics, the power of humor, the kaleidoscopic varieties of love, and so much else under the suns and moons. So many great stories of collateral joy have come out of and led to my Dylan friends. In short, no vehicle has been with me longer or run better.

You have followed Dylan for over four decades. What have been the biggest changes in that time? Do you think his fan following has met the challenge of keeping up with him as a person and an artist?
I want to break a huge question down into three parts in order to try to do it justice. The first part that jumps out at me asks what has changed in the landscape Dylan and his fans have shared. The next one grows out of my desire to put the word “which” in front of “fan following.” And, finally, there is the “as a person and an artist” kicker. First, let me offer a few very broad strokes regarding the biggest changes in the landscape. Along with wars, identity politics, and shifting demographics there has also been a sea change in how we all, Dylan included, get and hear our music. To massively understate the point (and to reference Dylan) there’s been a lot of water under the bridge, a lot of other stuff too. As far as how Dylan’s fans have responded to those changes and his changes, I first have to say that Dylan probably has picked up and shed and had more return fans than most artists. Part of that is no doubt a function of longevity. But more of it, I believe, is wrapped up in his willingness, maybe it’s even more a need, to change. Some folks jumped ship at Newport in 1965 when he went electric. But others got on board. It happened again, for a while, with Nashville Skyline and the so-called “turn to country music” that album represented. The biggest challenge that I and other fans had was when he took his art in a Born-Again direction in 1978. Some of us left for a while. But we came back, as all true fans always do. Just last week I had a conversation with Michael Gray, the dean of Dylan Studies. Michael has major qualms about the Sinatra covers on Shadows in the Night. I love them. That kind of conversation keeps on happening. I think such family feuds are actually one of the constants of fandom. Finally, I’m not really sure “keeping up” gets at it as much as “agreeing with” or “liking” does.
Fandom often begins with a connection in the form of a kind of entanglement that we have to spend time figuring out. Sometimes, like any relationship, we are not quite ‘in tune’ with our heroes. In several decades of fandom when did you feel most and least in tune with Dylan, and why? Was it what was happening to you, what he was doing, or both?
The short, easy answer—if I have to pick one—is both because being in tune implies mutuality, reciprocity, and the preposition with. I’m very fond of those Venn diagrams that we worked on back in the day. From early on, I imagined that the most romantic and exciting of them would completely and perfectly overlap, like a total eclipse of the sun or all colors becoming one. As we all know, those constantly shifting discs don’t align very often. The trick about being in tune with Dylan is that the 1968 me might be in tune with the 1965 Dylan. How doe we draw that Venn diagram? To be more concrete, Dylan wrote “Like a Rolling Stone” in 1965 and I felt like I really got it in the summer 1968 after my father, Martin Luther King, Jr. and Bobby Kennedy had all died. And I got it many times thereafter, in different contexts and at various performances. That song and I, not necessarily Dylan and I, were in tune but with some serious lag time and all that water under the bridge. I haven’t ever gotten totally in tune, as it were, with Slow Train Coming and what I took (on very partial and biased information, I might add) to be Dylan’s evangelical phase. But I have come to appreciate many of those songs and what I think they grow out of and speak to. So, now, there is some overlap on even that Venn diagram. But evangelism, except my own about Dylan and baseball, just isn’t a register that I’m comfortable with. I loved Blood on the Tracks (1975) from the moment I heard it because I was, at that point in my life, a bit tangled up in blue. Untangled today, I still love it for very different reasons. But does Dylan, who once said he could not imagine anyone enjoying that much pain, still connect with it? If not, does that make us out of tune? So yes, it was what was happening to me and what he was doing. Most importantly, thanks to Dylan and many others, I have learned that it’s very difficult to stay in tune with anyone for long periods of time, particularly with our heroes as we expect so much.


On page 109 you mention the resonance of Natalie Goldberg’s closing words in the documentary Tangled Up in Bob (Feidt, 2011): “You’re not going to find Bob Dylan in Hibbing. You are maybe going to find yourself or something that you want.” This presents a rather solipsistic take on fandom—a bit like saying that all research is also ultimately, only autobiographical. As you note yourself, however, Dylan fandom is also a mode of sociability for Dylan followers. I can’t help thinking that perhaps fandom is more like a unique and continuous encounter, like an interview. It’s not so much that we only find ourselves, but rather that what we are doing is piecing together the traces of another person and trying to locate how much we can empathize with them. What are your thoughts?

The interview comparison is a nice one, particularly if we expand it beyond the ongoing conversation with Dylan (and whoever or whatever another person’s Dylan might be). It does seem to me that a town meeting with Dylan’s art and life being the primary agenda item would describe Hibbing 2013 for me. I no doubt learned even more about the depth of my admiration for Dylan and my enjoyment of kindred spirits. However, “find[ing] myself” would not really describe the experience because I already basically knew what I felt about Dylan. One thing I did find was that I had underestimated the magnitude of it all.  Let’s call it a difference in degree rather than one in kind. And although I know I didn’t “find Dylan” there either, I have to say that, after having seen his high school, his house, the swing in his girlfriend’s yard, and the proximity of Highway 61, I felt like I understood his art a bit more. I felt some of the same one-more-layer-of-information way when I saw Twain’s house in Hartford and the chapel in New Bedford that Melville wrote of in Moby-Dick. It’s part of the joy of travel, time and otherwise, that sometimes the reality not only solidifies but also outstrips what’s imagined.


PART I IS AVAILABLE HERE.
Scroll Up Top