Skip to content
Share
Candy Leonard’s ambitious 2014 book Beatleness: How the Beatles and Their Fans Remade the World, combines a wealth of interview material with fans who were there in the 1960s and offers a portrait of the group and its fans in their era. The result is a rare, insider glimpse into of one of the most historically significant fan phenomena. Since publishing Beatleness, Candy has written about why we still mourn John Lennon in the PBS magazine Next Avenue, and described the Beatles impact on baby boomers for The Huffington Post. Since I consider Beatleness an insightful model of accessible writing on music fandom, I was really pleased when she agreed to an interview.
THIS IS THE SECOND PART OF A TWO PART INTERVIEW. READ THE FIRST PART HERE. 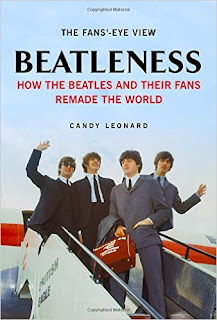